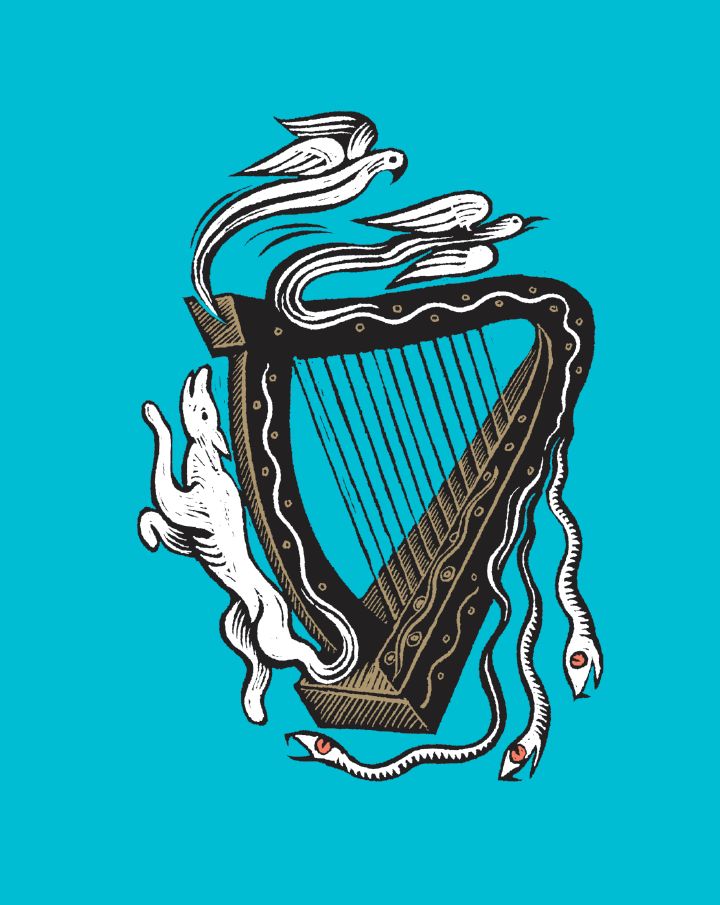 The images of harps that we see today on coins and on passports and as part of the Guinness logo reflect the shape of the ‘Brian Boru Harp’, which is kept in Trinity College, Dublin. Despite its name, this famous harp, the oldest in existence in Ireland, seems to have been made in the fourteenth or fifteenth century, and so was never owned or played by Brian Boru, an Irish king who died in 1014.

The Modern Irish word cruit refers to a small harp, but in the Middle Ages this term might have been used for the kind of the instrument depicted on high crosses and metalwork. These seem to be stringed instruments which were played with the finger-nails or with a plectrum and are closer to what we might call lyres today. No example of such an instrument has survived, however, so it is difficult to know exactly what it looked like or how it was played.

Although early Irish tales sometimes refer to cruit, the fantastic accounts in these stories don’t tell us much about the real instrument either. ‘The Cattle-Raid of Fróech’, for example, describes instruments from the Otherworld which ‘had figures of snakes and birds and greyhounds in gold and silver and as the strings moved, those figures would circle around the men sitting nearby’.

What early harp music sounded like is also difficult to know. From the sixteenth century onwards, many harpists became travelling musicians and did not write down their tunes. Fortunately, in 1792, a nineteen-year-old named Edward Bunting collected harp music at a festival in Belfast, and so preserved some tunes which probably would have been lost otherwise.