Read the passage on the word ceol and look at the different images of lyres or harps in Images. Then conduct a Snowballing exercise to think about the following questions. Having written down their suggestions individually, pupils should merge into a group of two, then four, then eight, and so on, until a whole-class position is reached. Groups will need to select a time-keeper, a scribe and a spokesperson.

In Modern Irish, cruit can mean ‘a hump’ as well as ‘a small harp’. Welsh has crwth for both ‘a hump’ and ‘a stringed-instrument’. Some Irish and Welsh words are similar because Irish and Welsh are both Celtic languages. Examples of related words are:

Sometimes, where an Irish word has the letter c, the corresponding word in Welsh has p or b:

Scottish Gaelic survives in areas of Scotland, Manx is still in use in the Isle of Man, Breton is spoken in Brittany in Northern France, and Cornish is associated with Cornwall in the South-West of England.

The map below shows where Celtic languages are used today. Download and label this map with the names of geographical areas and their associated languages. 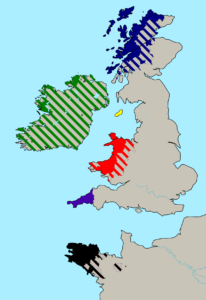 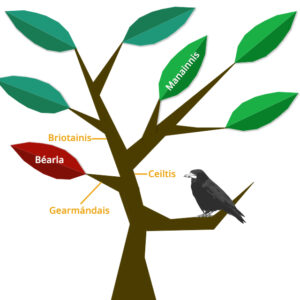 The power of memory

Make up a song or a short story. Record it on a phone and set this aside for later. Then pass the song or story around the class, one person telling it to another in private. Record the final version and listen to it alongside the original recording. Has the song or story been passed on accurately? What has changed and why?